Trying to get Jay Hulme to do what he’s told is like trying to get a cat into a bath. There’s a lot of screaming and scratching and crying. Hopefully that won’t happen at the font.

In fact it would take the power and love of almighty God to get him to do as he’s told, but even getting him here was difficult. I can imagine the Lord rolling their eyes saying ‘Sweet me!’ Jay tried to ignore God, to get away from Her, to then try to abuse Him so that He’d give up and leave Jay alone. But no, they wouldn’t. You could call it a miracle and speaking of miracles…

Jay and I first met at a cheese table at Alice and Coral’s Civil Partnership. What a day that was. Now from the first moment meeting Jay I realised two things. Firstly, oh man, he has opinions. Secondly, that he was a very spiritual person.

We also spoke about Jay’s intolerance to cheese, and how he’d eaten a vast amount of it, of course, and how he would, let’s just say, regret it later. So I said a prayer of blessing on his stomach kind of jokingly.

A few days later he told me, I had no stomach issues that night! I’m calling this your first miracle! Yes! I replied, that’s the first step to sainthood. It’s my never ending quest to become the first and only Saint Graham. However, I’d rather not be known as St Graham, The Cheesy. But looking through my sermons that’s probably an apt name for me.

Perhaps it is a cheesy line but every life is a miracle to God. Yours, mine, Even Jay’s! We’re here to celebrate the miracle of life, that Christians believe God breathes into all of us. The new life that God gives us through forgiveness and love. To celebrate all that Jay is, and that God loves him and us, completely, utterly and fully. There is nothing that can separate us from that love. Even Jay, if we have wrong opinions about churches on twitter.

Jay has made the choice to follow the God that has called him. Jay is making the commitment to be a Christian for the rest of his life. Believe it or not that doesn’t mean he suddenly has to develop a love of quiche, and believe you me, I’ve tried to convince him on the merits of tea. But after getting him to try earl grey and him exclaiming ‘It tastes like licking the inside of a saxophone’, well I gave up. Luckily liking tea is not one of the conditions of become a Christian.

Jay has chosen to acknowledge the love that created him, that shines out of him, as anyone who’s spent more than five minutes with him can see. He loves deeply.

Baptism is about being bathed in grace, love and forgiveness, three things the world needs so much more of, and three things that God supplies in abundance.

What we’re doing here today is acknowledging the love for Jay that has always been there.

It’s such an amazing mystery that in the water of baptism we are bound to God, and God’s love. We are bound with all who have come before us in the church, and all who will come after, until the end of time.

God’s love is so great for Jay and all of us, that it goes beyond death. When we return to dust, we will not be abandoned.

Though people may abandon us, though the world can be cruel and wicked and angry, God is never that. Looking at what God has done for us, it is quite frankly ludicrous that God would reject anyone. Gay or straight, non-binary or binary, bi, trans, asexual, homosexual, all of it is part of the created order, blessed, governed and sanctified by God. God wants to be in relationship with all of that, because They made it.

God isn’t some kind of cosmic abuser, who casts us into eternal punishment if we’re not ‘the right way.’ And I want to say sorry if you’ve ever had that said to you. Sorry for the way people have treated you, that is a reflection who they are, rather than God.

“My substance was not hid from thee, when I was made in secret, and curiously wrought in the lowest parts of the earth. Thine eyes did see my substance.”

Jay would of course choose the most DRAMATIC version of the Bible to be read from. But this passage makes a point:

As they say on the Internet Jay, you have been SEEN.

God’s not a tyrant we all have a choice to either acknowledge that we are seen, and go towards God’s love, that She pours on us. Or we can choose not to. Jay has made that choice. God chooses to be with Him and all of us.

You did not choose me, but I chose you. As Jesus said to his disciples in that powerful reading from John’s Gospel.

It’s so good Jay chose this reading because he gets it. He gets what Christian life is all about. You’ve been seen again Jay.

It’s about the unconditional and totally un-earned love of God. That we should attempt to love each other in the way that God loves us.

But when we don’t, that’s okay. The only sins we can’t be forgiven for are the ones we are not sorry for.

Today Jay says sorry for all the bad he’s done. From all the small things that have held him back. To all the big sins, like the brutal, BRUTAL feedback he gives on other people’s writing. I’m not bitter, you’re bitter.

He chooses to say sorry. He’s not perfect, despite what he’d like you to believe. Or always right, as he frequently tells me.

He will repent of his Sins, which literally means to turn away from. To turn away from bad, and be fully embraced in God’s loving and good purposes for his life.

Today is a celebration, a new beginning, a new phase in Jay’s Christian journey. In it he’s following in the footsteps of Jesus.

Jesus was baptised in the river Jordan by John the Baptist, but at that moment the Holy Spirit, the mystical life giving, loving power of God descended on him. Then a voice from heaven said ‘This is my beloved son.’

Jay my hope and prayer is that you feel that today. That you know yourself to be surrounded, not only by the love and support of all of us here, but also that you feel held deeply in God’s hands. That the Holy Spirit is with you, and loves you to the end of time. That this moment is now, and also eternity.

Now to the one who knows us infinitely and loves us for eternity, be blessing and honour, glory and power, for ever and ever. Amen.

Popular posts from this blog 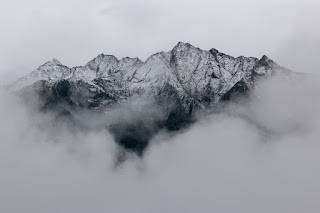 Have you ever been up a mountain? I once climbed Snowdon with my Dad when I was a teenager. No, we didn’t take the train. We walked up it, well, we did take the train back down. When we got to the top it was a bit of a disappointment as it was a cloudy day and we couldn’t see anything, there was no view, our vision was blocked, blinded by the water vapour around us, a great grey mist. Mountains are a place of encounter with God. It fits in with our almost primeval idea that God is up there, in the sky, and we’re down here. Churches are often built at the top of hills. One reason is practical, that everyone else can see it. Another is it’s higher, closer to God. Now of course we know as Christians that God isn’t up there. God is all around us, and Christ is all, and in all. Modern science has shown us that heaven isn’t above the clouds. Oh and by the way, the earth is round, regardless of what some people think. Yet still I find myself looking upwards when I want to speak
Read more 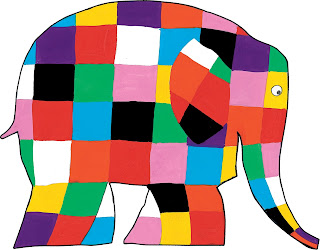 This sermon is based on the above bible readings and the book 'Elmer' by David McKee  Elmer is an unusual elephant, he’s not elephant coloured, in fact he stands out from the crowd, and although he’s much loved by his herd, he still feels bad about being different. I just want to blend in he thought, I want to be normal like the rest. But Without him, and his sense of humour and his colour, life is very dull for the elephants. Life is dull without variety, and the story of Elmer is one I really identify with. Elmer is who he is, the fact that he’s patchwork coloured is not what makes the herd love him, but it’s his personality, who he is that makes him loved. Even when trying to fit in, he can’t help but be himself. I’m gay, for many years I hid this from myself, and from all the people around me. It made me violently unhappy, I couldn’t see that I was loved exactly for who I am, that being a bit patchwork, a bit different was okay. From what I saw in societ
Read more